The Police Services Act gives the OIPRD the power to conduct systemic reviews. A systemic review goes beyond the immediate issues raised by a given complaint and looks at the underlying causes to determine whether an organization’s practices comply with its underlying legal and policy framework and, more importantly, whether that framework can be improved to prevent such issues from arising in the future.

A systemic review is generally not about individual officers. Its purpose is not to assign individual fault, but to determine whether systemic failings have occurred, to make recommendations to address those failings and to help restore and enhance public confidence in police and policing.

Breaking the Golden Rule: A Review of Police Strip Searches in Ontario

Police in Ontario conduct too many unjustified strip searches that intrude on the privacy rights of those affected and negatively impact criminal court cases, according to the latest systemic review report released today by the Office of the Independent Police Review Director (OIPRD).

The report finds police procedures regarding strip searches are inconsistent across the province and often inadequate as to what constitutes a strip search and when and how strip searches should be conducted, authorized or supervised. The report also finds significant deficiencies in strip search data collection, documentation and officer training.

In 2001, in R. v. Golden, a landmark decision on the constitutionality of strip search practices, the Supreme Court of Canada defined what amounts to a strip search and when and how they can lawfully be done.

Breaking the Golden Rule: A Review of Police Strip Searches in Ontario, provides a template for strip search procedures and a sample strip search form, and makes 50 detailed recommendations on how Ontario police services should conduct, document and receive training on strip searches, including:

The report also recommends that police services keep race-related statistics on strip searches to enable an evidence-based evaluation of the role that race plays in decisions to conduct strip searches.

“Police in Ontario conduct well over 22,000 strip searches a year. It is extremely concerning that almost two decades after the Golden decision, police continue to conduct strip searches in violation of the law. This comes at a high cost to those directly affected by humiliating and intrusive searches and to the justice system, especially where unlawful searches result in the exclusion of evidence or the staying of charges. Consistent, comprehensive policies and procedures, proper documentation, adequate statistics, and effective training are all required to ensure strip searches are only done when needed, and that they are done in accordance with the law.”
— Gerry McNeilly, Independent Police Review Director 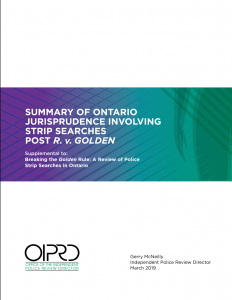 The Office of the Independent Police Review Director (OIPRD) released its systemic review report on the relationship between the Thunder Bay Police Service (TBPS) and Indigenous communities, finding significant deficiencies in sudden death investigations involving Indigenous people that are due, in part, to racial stereotyping.

“The serious inadequacies and premature conclusions in TBPS investigations of Indigenous missing persons and sudden deaths have strained what was already a deeply troubled relationship. My recommendations provide tools to help TBPS ensure that its investigations are thorough, effective and non-discriminatory. My recommendations also provide TBPS with a path forward to improve its relationship with Indigenous people.”
— Gerry McNeilly, Independent Police Review Director

Broken Trust: Indigenous People and the Thunder Bay Police Service, is the culmination of an extensive review and analysis of 37 TBPS investigations, dozens of interviews with former and current TBPS members, First Nations Police Services, Ontario’s Chief Coroner and Chief Forensic Pathologist, and more than 80 meetings with Indigenous and non-Indigenous community and service organizations, individuals and Indigenous leaders. The report makes 44 recommendations, including:

“TBPS has begun initiatives to improve investigations and that gives me cause for hope. I will monitor and report to the public the extent to which my recommendations are implemented. The community is entitled to no less. That represents my commitment to Indigenous people, TBPS and the broader community it is responsible for serving.”
— Gerry McNeilly, Independent Police Review Director 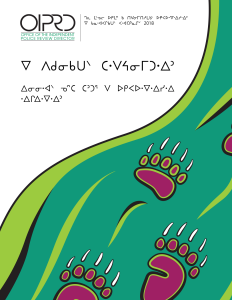 Executive Summary and Recommendations in Cree 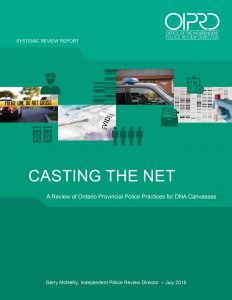 On July 12, 2016, the Independent Police Review Director released the systemic review report Casting The Net: A Review of Ontario Provincial Police Practices for DNA Canvasses. The Director called on the Ontario Provincial Police (OPP) and other police services in Ontario to adopt a policy to govern how DNA canvasses are conducted. The report provided a model policy for guidance.

The Director was satisfied that the OPP investigation was not motivated by racial prejudice, but the nature and scope of the DNA canvass was overly broad and certainly had an impact on the migrant workers’ sense of vulnerability, lack of security and fairness.

The Director also found that the Elgin County OPP investigation:

On May 16, 2012, the Independent Police Review Director released the G20 systemic review report, Policing the Right to Protest. The report provided an in-depth analysis of issues surrounding public complaints against police during the G20 summit in Toronto in June 2010.

The Director found that while the vast majority of police officers carried out their duties in a professional manner, some police officers ordered or made arrests without reasonable grounds, used excessive force, overstepped their authority when they stopped and searched people without legal justification, and failed to take adequate steps to address problems at the Prisoner Processing Centre.

The report provided 42 recommendations to improve the interaction between the public and the police during future protests and to strengthen confidence and trust in police and policing. 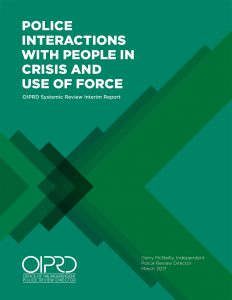 Police Interactions with People in Crisis and Use of Force

The OIPRD is conducting a systemic review of Ontario police services’ use of force, lethal use of force, de-escalation techniques and approaches in dealing with people in crisis.

On March 31, 2017, the OIPRD released an interim systemic review report on police interactions with people in crisis and use of force. As a result of the interim report, the OIPRD is auditing the police services involved in the deaths that generated the coroner’s inquests examined in the report and evaluating the extent to which recommendations have been adopted and implemented by these police services. The audit will also analyze what is working well and what requires improvement. The OIPRD’s systemic review will work in conjunction with an advisory panel of experts from the justice, mental health and academic fields to identify best practices and any additional recommendations to be made. Ultimately, the OIPRD will issue a final report intended to help ensure better outcomes in police interactions with people in crisis.

“The interim report documen​ts the​ recommendations that have been made by Ontario coroner’s inquests into the deaths of people in crisis during interactions with police, and by Justice Iacobucci in his report Police Encounters with People in Crisis. The work that has already been done to study and understand police interactions with people in crisis, combined with this interim report, provides me with a critical tool and a foundation for the work my review will do in the weeks and months ahead.” – Gerry McNeilly, Independent Police Review Director​

OIPRD Revises Terms of Reference for Use of Force Review​​